Research at the National Environmental Research Program’s (NERP) Environmental Decisions Hub has found that heat waves, droughts and floods expected under climate change will alter environmental conditions so much that many eucalypts will no longer survive in their native ranges.

Replanting is unlikely to help woodlands and forests persist, the scientists warn.

“This is due to their long regeneration times and the relatively short dispersal distances of their seeds.

“Many of Australia’s approximately 750 eucalypt species may not be able to keep up with climate change sufficiently to avoid heavy losses – and these will in turn have cascading impacts on local wildlife and other plants,” she adds.

To find out whether Australia’s various eucalypts can withstand likely climate changes, the NERP researchers tested different climate scenarios based on those used in the latest Intergovernmental Panel on Climate Change (IPCC) report. “Previous extreme droughts have caused widespread dieback in eucalypts in some regions.

This suggests that some, such as savannah species in northern Queensland, are already at their limits,” Dr Butt says.

“Climate change predictions of a shift to longer, drier periods in coming decades could therefore tip our eucalypts over the edge in many regions.”

In the study, the researchers applied mid-range and extreme climate scenarios to 108 eucalypt species and grouped them by climate region across Australia. Dr Butt says that models predict that climate changes will drive large shifts in the trees’ distribution.

“Large areas of central Australia will become unsustainable for eucalypts, due to extensive summer drying and more frequent droughts,” she says.

“Trees may gradually shift their ranges towards the coasts where growing conditions are more favourable, or die out due to drought.

However, colonisation of new areas may not be possible as land is cleared for farming.

Dr Butt says the study shows that reforestation or restoration plans to save biodiversity and environment may not always be effective:

“We can’t assume we can simply restore ecosystems by reforestation.

“Replanting the same eucalypt species won’t help if the climate conditions are no longer suitable.

“We need to think about how to help our local trees and plants to buffer climate stress,” Dr Butt says. “We also need to focus on how to reduce the impacts of climate change, by cutting carbon emissions and reducing other environmental stresses on our native trees.” 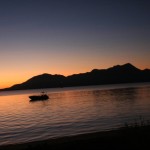